InterGlobix led the Subsea Panel with leaders from Microsoft, Facebook and Telxius sharing their comments on technology and how they achieved the fastest latency of any subsea cable ever deployed.

QTS Realty Trust, together with QTS Richmond NAP, the industry’s first and only Network Access Point (NAP) in the central region of the US Seaboard, an International Interconnection and Peering Point in Richmond, VA and InterGlobix LLC, a global solutions company focused on the convergence of datacenters, terrestrial fiber and subsea fiber, announced today that InterGlobix is leading the Subsea Panel at today’s Inaugural NAP Summit. Additionally, InterGlobix Magazine, owned by InterGlobix, is the the Official Media Partner of the event. 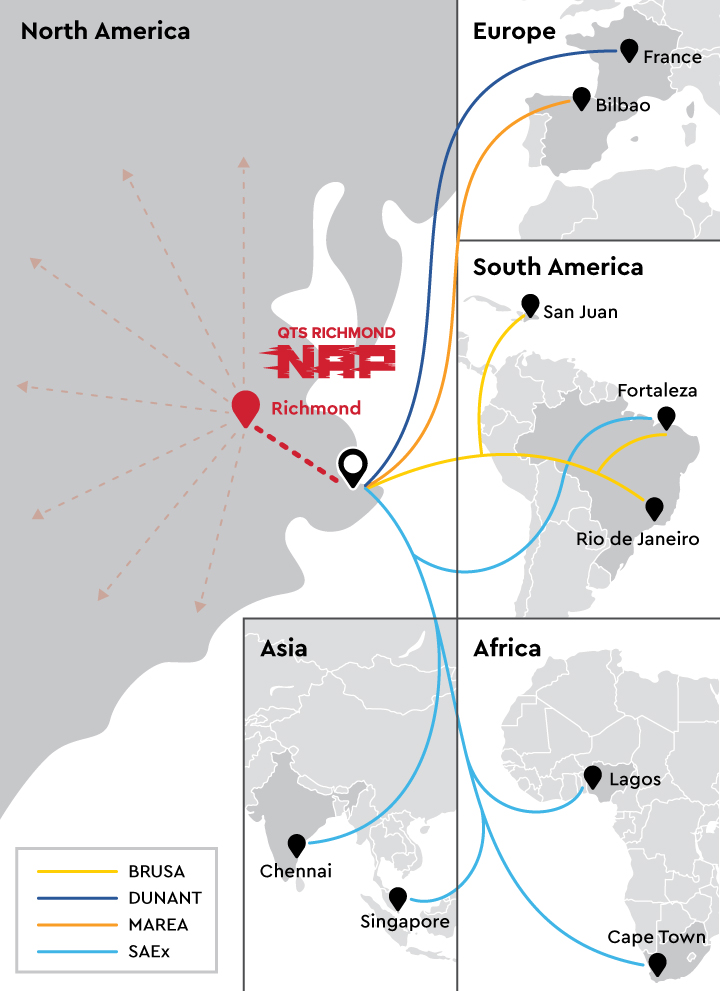 Following opening remarks will be provided by Vint Cerf, co-founder of the Internet, the event’s Subsea Panel took place at 10:00 am EST today, welcoming industry leaders from Microsoft, Facebook and Telxius to participate in the Summit’s most prestigious panel discussion. These companies have been the pioneers in bringing the first subsea cable, MAREA to land on the shore of the Commonwealth of Virginia from Sopelana, Spain. Additionally, Telxius, the telecommunication infrastructure company of the Telefónica Group, operates the BRUSA subsea cable, the first high-speed, low-latency subsea cable to connect North America to South America. These industry-leading cables provide direct, high-speed and low-latency connectivity from America to Europe and can be accessed from the QTS Richmond NAP.

As part of the partnership with InterGlobix, the QTS Richmond NAP inaugural summit will be editorially covered in an exclusive feature story on the summit in the next edition of the InterGlobix Magazine. The premier publication has rapidly become a favorite of various industry professionals globally across the datacenter and connectivity industry. InterGlobix Magazine, a globally distinguished publication is the Official Media Partner for the QTS Richmond NAP Summit.

Vint Cerf, Chief Evangelist for Google, also known as one of the co-inventers of the Internet, recently noted, “The subsea cables that terminate in Richmond have opened an amazing opportunity for Henrico County to become a LOCUS for both domestic and international applications. That gives good reason for the creation of the QTS Richmond NAP, a place where multiple providers and Internet services can meet, connect and reach the international cables that link Virginia to other parts of the world.”

“InterGlobix has been a great partner in leading the efforts for the formation of the Richmond NAP and building the momentum for this important initiative in the Internet Infrastructure industry. We have also partnered with the premier publication InterGlobix Magazine as a media partner featuring an exclusive story in the June edition”, said Clint Heiden, CRO of QTS Data Centers and Founder & Member of QTS Richmond NAP.

“Diversity to the Internet is extremely important and the formation of a NAP of this magnitude is a very rare event. The May 7th Inaugural NAP Summit is only the beginning of this initiative; the results of which will be visible in the years to come, from an economic, business development and technical standpoint leading to diversity and growth of the Internet,” said Vinay Nagpal, President of InterGlobix and Founder & Member of QTS Richmond NAP.