Previous Next
Subsea Sector Heats Up with Cable Building Boom

It’s a great time to be in the subsea sector! Several new cables are part of the current building boom to support growth by content providers and OTTs. NJFX Founder and CEO, Gil Santaliz, says, “This investment of money and infrastructure is a win-win for everyone, including the innovators that will think up the next big app you can’t live without.”

NJFX is the first and only colocation campus to sit at a cable landing station in the U.S and offer Tier 3, carrier-neutral data center capabilities. Santaliz will bring his expertise to the Submarine Networks World Europe 2018 conference to be held in London, UK on February 20 – 21, 2018. Santaliz with join other industry experts on the keynote panel entitled ‘The Evolution of the Subsea Industry.’ The panel will discuss the changing subsea cable business models, demand drivers, and how new technologies such as Software-Defined Networking (SDN), Network Function Virtualization (NFV) and the cloud are changing the industry. 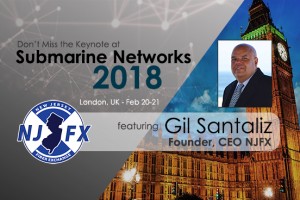 As North America’s preeminent international hub for subsea communications, NJFX serves as the interconnection for many international carriers with multiple predictable, private backhaul and U.S. termination options. An industry visionary, Santaliz is leading the paradigm shift in locating a Tier 3 colocation facility at the point where the cable systems make landfall.

“The future of Cable Landing Stations lies within the ecosystem effect where a healthy density of diverse networks is created and attracts other infrastructure development,” adds Santaliz. NJFX offers a Subsea Exchange ecosystem, which combines the right number of carriers participating in a marketplace to interexchange capacity. This offers the capability of tapping into the network at the Cable Landing Station, which can in turn lower latencies, increase speeds, increase capacity options and remove single points of failure. Santaliz says this capacity will also foster innovation, in terms of new applications and software.

In addition, this model may be the key to the growth in the subsea space. “We are seeing the next generation of subsea deployments, the most since 2000, which will support the next 20 years,” states Santaliz. “These new cables have a new financial model driven by the OTTs with fewer carriers involved. I look forward to speaking at Submarine Networks World Europe conference and discussing the changing dynamics and innovations that are spurred by this growth.”