PEG Bandwidth has done it again! For the second year in a row, PEG Bandwidth has been named to Inc. magazine’s annual Inc. 500|5000, an exclusive ranking of the nation’s fastest-growing private companies. This year the company has been ranked number 392 after checking in at No. 98 in 2014. 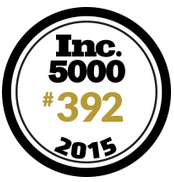 PEG Bandwidth was also the fourth highest ranked telecommunications company on this year’s list. The list, now in its 34th year, features the return of companies such as Intuit, Zappos, Under Armour, Microsoft, Jamba Juice, Timberland, Clif Bar, Pandora, Patagonia, and many other well known names.

Founded in 2009, PEG Bandwidth has seen exceptional growth over the past six years. The company revenue continues to increase year over year, with a three-year sales growth of 1,200%. PEG Bandwidth attributes the award to this sales growth and focus on
on providing solutions to its customers’ most challenging issues.