The link under the bed of Rio Negro is a pilot project, part of Connected Amazon Program that will take optical fiber to the interior of Brazilian Amazon state by means of rivers paths. 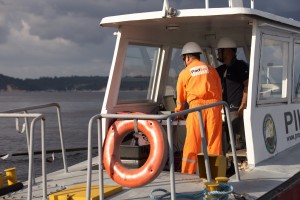 The Connected Amazon program is a Brazilian Army initiative in partnership with Amazon government and other public and private institutions that aims to bring broadband connection to the interior of the Amazon State. With the expected program deployments, regions that are currently served by satellite connections, limited and expensive, will have access to an extensive fiber optic network to be launched in the bed of the region’s main rivers. The program, in its entirety, forecasts attending about 7.5 million inhabitants with the offering of broadband internet services that will allow applications such as telemedicine and distance learning, while also interconnecting health, public safety, traffic and tourism institutions.

In order to demonstrate the advantages and viability of using subfluvial optical cables, the Amazon Connected program includes this pilot project, which connects two Brazilian Army bases through a stretch of about 7 km of subfluvial optical cable released in the bed of the Rio Negro in Manaus city, Amazon State capital. At this stage of the program, Padtec was the operational arm responsible for all launching stages, from the riverbed survey to the actual launching and optical cable test. Employing its Submarine Division staff, which has extensive experience in operation and maintenance of submarine cables to major Brazilian operators, Padtec has successfully completed the subfluvial cable launching activities, which were witnessed by major Army authorities, partners involved and the press on April 8. With the cable now deployed in the river, the Army and its partners will make the system integration with the ground stations and the pilot project official opening is scheduled for the coming weeks.

“For this region where the preservation and minimal environmental impact are key requirements, launching subfluviais optical cables is the best technique to get quality connection and high capacity for those who live at the river’s shores,” said Mario Roberto Vassallo, Padtec Submarine Systems Director. “It is the first time worldwide that an optical cable is released in a river of this size and we are proud to participate in this project.”

As Executive Vice President of ABM and Client Strategy, Dean brings a complementary mix of industry analysis, strategy and deep PR/Marketing acumen to the JSA team. With a history of brand elevation and start up strategy successes, Dean leverages his diverse skill set and client-centric philosophy to serve JSA clients and grow the company.