Behind each and every JSAer there is always that special something – it’s what makes our team so uniquely talented, dedicated and spirited. While it might be hard to believe that we do in fact have lives beyond the walls of our home offices (no matter what time you may receive an email from one of us), Matt Pera makes thriving in both his professional and personal lives look easy. 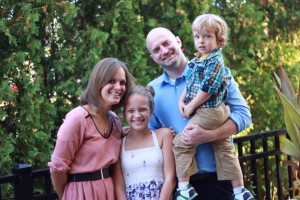 Matt with his wife, Amy, and their children Lily & Hunter

As an Account Director at JSA, Matt leads his accounts with vigor, putting particular emphasis on strategy and creativity – ensuring his clients are given the appropriate platform and tools to shine. Aside from being an expert in marketing and public relations – not to mention an essential member of the JSATV team – Matt is a devoted husband to his wife Amy; a loving father to Lily and Hunter; a hilarious and comforting colleague to, well, us; and a supremely talented playwright.

While Valparaiso, Indiana might not officially be the epicenter for theater, Matt found himself immersed in everything creative from a young age. Matt’s parents are both well-known theater folk (fun fact: his father actually directed fellow JSAers Dean Perrine and Carly Smith in the play Rabbit Hole a few years back), so he was often surrounded by actors and artists. From a very young age, Matt observed the creative process in awe and always felt a strong desire to be a part of it. After maintaining years long connections with the theater, Matt became inspired to write a play. “I always wrote short stories, screenplays and a little bit of poetry, but I didn’t decide to try writing plays until recently,” Matt explained. “I felt like I had a good grasp of the medium and wanted to see if I could do it.” And just like that, Matt’s main character popped into his head and a first draft was born. Fast forward through months of crafting, fine-tuning, rewriting, and workshopping (which, according to Matt, is “really the most important part”) – and his play got picked up by the renowned Chicago Street Theatre in Valparaiso, and is slated to debut in the beginning of 2017.

Everyone at JSA is proud to call Matt a colleague and friend – be forewarned, we might all have out of office messages come next year when we travel to see his play. Check out my Q&A with Matt below and get to know and love him like we do.

1) How did you get involved in the PR/Telecom industry?

I have always loved to write, beginning with short stories when I was in elementary school and then screenplays and plays as I got older. I got my degree in journalism and English from Indiana University and started out wanting to be a sportswriter. After some time working as a sportswriter and news editor in Chicago, I ultimately decided it wasn’t for me. It was then that I started working as a communications director for various nonprofit organizations in Northwest Indiana, and eventually branched out by doing freelance PR and marketing on the side. Then I met Dean Perrine, a friend and fellow Account Director at JSA. Suffice it to say we hit it off immediately and he helped me get an interview with Jaymie in the summer of 2013. I’ve been with JSA ever since. 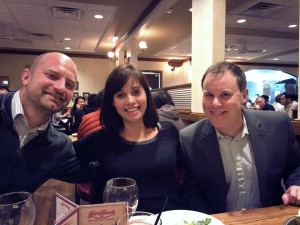 All smiles with Dean & Jaymie

2) What do you find the most appealing about the telecom and technology industries?

Telecom and technology are dictating our direction as a society in so many ways. People are becoming more and more connected, and demand the resources that allow them to stay that way. Businesses across so many verticals – healthcare, education, finance and retail, just to name a few – rely heavily on technology to ensure they are successful. Telecom and tech companies are only going to become more relevant in coming years and decades.

I don’t really have a typical day – other than waking up and sitting down at my computer. Each day brings new challenges, projects and priorities. It’s one of the things I love most about JSA. 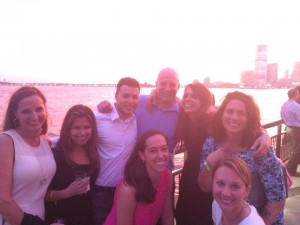 4) If you could use three words to describe JSA, what would they be?

5) What is your writing process in a nutshell?

I let a lot of ideas bounce around my head pretty much all the time and they’re mostly bad. But eventually one I like will pop up and I’ll start thinking about it constantly. Usually I start by honing in on one character and what makes that person unique and interesting, then I begin building the story around him or her. Then I’ll actually put pen to paper and flesh out ideas. There’s my first draft.

6) What was the best writing advice you’ve ever received?

Rewrite! It’s really the most important aspect of writing. I don’t know any writers that sit down with a notebook or at a computer, and just hammer out a masterpiece. The first draft is to get the ideas down and the story developed. Then you have to go back and improve it and fill in the blanks and ask yourself a lot of questions.

7) Who are your favorites writers, playwrights or otherwise?

8) What piece of literature could you read over and over again?

The Border Trilogy, by Cormac McCarthy (All the Pretty Horses, The Crossing and Cities of the Plain) and Sometimes a Great Notion, by Ken Kesey.

10) What is your ideal Saturday night?

Ordering pizza and watching movies with my family.

11) If you could transfer your home office to anywhere in the world for a month, where would it be?

I think it would be really interesting to put all JSAers in one office for a month. Let’s put it in Costa Rica and see what happens.