Istanbul is the Latest Stamp in DE-CIX’s Passport

DE-CIX has been busy traversing the globe in 2015 to bring its premium Internet exchange services to those in Marseille, France; Dallas, Texas in the US; and Palermo, Italy. Today the carrier and data center-neutral Internet exchange added a new stamp to its passport, launching DE-CIX Istanbul in Turkey.

The new exchange in Istanbul will locate its first presence in the MedNautilus building and will deliver carrier and data center-neutral Internet exchange services in Turkey, the Caucasus region, Persia and the Middle East. DE-CIX will enable all of the data center floors, except the handful that are occupied by colocation operators such as MedNautilus, Turkcell/Superonline and Verizon. 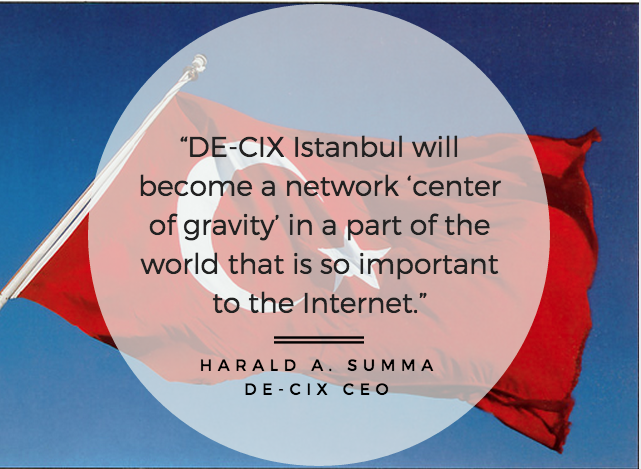 Customers of the exchange will have a robust and diverse community at their finger tips, as the building being a landing station for the MedNautilus submarine cable backbone and being served with capacity from all of the major national Turkish and a large number of international carriers. DE-CIX service will be available in over 15 additional locations across the city of Istanbul, as well as in Turkey’s cities of Ankara, Bursa and Izmir.

In addition to the new exchange’s launch, DE-CIX also announced the acquisition of the Istanbul Internet Exchange (IST-IX). It will upgrade the exchange to its 100GE-enabled DE-CIX Apollon platform.