The latest in the SCALABLE Tuesday Tech Blog, released this week, took a close look at how the fidelity of the model directly impacts the accuracy of the simulation.  Keep reading below for more of this blog, and go to the SCALABLE Networks website to learn more about SCALABLE products.

Wireless network simulation offers an efficient, cost-effective way to assess how a network will behave under different operating conditions. For analysts and

Networks operate in many different domains, such as terrestrial outdoor and/or indoor, air-borne, under-water, or space (satellites) and sometimes span multiple domains. Communications in each of these domains have very different characteristics which must be represented in the model for it to produce actionable results. For example, consider a search and destroy mission which uses a multi-domain network: an Unmanned Underwater Vehicle (UUV) detects a suspicious vessel during surveillance and transmits the information to an on-surface buoy. The buoy communicates the information via a satellite link to a terrestrial command and control (C&C) center. The C&C center analyzes that data and sends a message via a VLF base to a submarine in the vicinity of the suspicious vessel for further investigation and engagement. The communication between the C&C center and the VLF base occurs over a microwave link (see Figure 1) and then between the VLF base and the submarine over a VLF link.

A planner may use simulations to decide how to optimally locate UUVs and buoys and to estimate the total elapsed time between detection and engagement. In this mission, communication takes place over different media, with drastically different communication characteristics. An underwater communication environment is highly dynamic and noisy, with low, directional, communication bandwidth, and low propagation speed. Satellite links are constrained by very long delays and are sensitive to weather conditions. Terrestrial wireless signals are greatly impacted by terrain features (hills and valleys, buildings and vegetation), obstacles, weather conditions, and transmissions from other sources. To adequately capture the impact of these characteristics on signal propagation, the physical (PHY) layer for each link must be modeled with high fidelity. 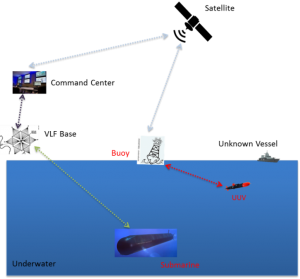 Another example of wireless communications is shown in Figure 2, which highlights the major factors that impact wireless signal transmissions between a transmitter and a receiver in an urban environment. 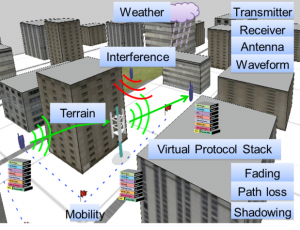 The performance metrics computed by wireless network simulations (delay, throughput, packet-loss, etc.) are particularly sensitive to the fidelity of modeling the physical (PHY) layer. Figure 3 shows how the PHY and propagation layer models in SCALABLE’s network simulators, EXata, and QualNet, capture all of the components needed to accurately model the end-to-end signal transmission from transmitter to receiver. 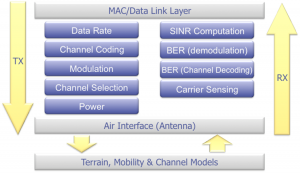 While essential to producing accurate results, high fidelity models of the PHY layer are also computationally intensive. To obtain faster than real-time simulations, network simulators may use low fidelity or abstract models for the PHY layer. But, as we show below, this often leads to inaccurate results, thereby limiting the utility of simulation in analysis and planning. Hence, to be of practical use, wireless network simulation must employ high-fidelity models, but still, be able to run fast to produce actionable results.

To illustrate the impact of PHY layer model fidelity on simulation results, we show simulation results using EXata and QualNet for a wireless scenario in which several nodes communicate using a WiFi network. Figure 4 shows the received signal strength and throughput for a single transmitter-receiver pair for two cases: in the first case a low-fidelity abstract PHY model is used to model signal propagation, and the second case uses the high-fidelity 802.11n PHY model. All other parameters, including the transmission power and transmitter mobility, are the same in both cases: the transmitter transmits at a constant power of 20 dBm and moves towards a stationary receiver, alternately moving for 10 seconds and stopping for 50 seconds for the duration of the simulation (300 seconds).

As seen from the top chart, the received signal strength at the receiver, which is the same for the two cases, remains constant when the transmitter is stationary and increases as it moves closer to the receiver, as expected. In a physical network, an 802.11n device uses an adaptive data rate: it adjusts the modulation and coding scheme (MCS) based on the received signal strength, and as the received signal strength increases, it selects an MCS which provides a higher data rate (and hence, higher application layer throughput). The bottom chart in Figure 4 shows the throughput as a function of time for the abstract and high-fidelity models, where the high-fidelity 802.11n model replicates the expected behavior faithfully. On the other hand, the abstract model produces a constant throughput because rather than using the accurate adaptive data rate model, it instead uses a constant data rate. 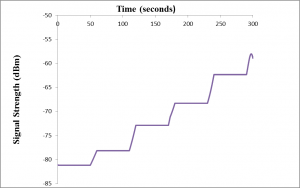 EXata and QualNet model all the important components of the PHY layer at a high level of fidelity: transmitter, receiver, and antenna models; path loss, fading, and shadowing models; mobility models; and models for environmental effects (terrain, weather, and buildings, etc.). Thus, EXata and QualNet provide accurate simulation results across a diverse set of scenarios. To handle the increased computational complexity, these simulators use state-of-the-art programming innovations to not compromise either speed or accuracy. These techniques rely on using an efficient kernel designed to leverage multi-core and parallel processors to dramatically increase the event processing rate and hence, simulation execution speeds.

EXata and QualNet include an extensive set of high-fidelity models of protocols at all layers. For the PHY layer, the suite of models encompasses the primary contexts in which wireless networks are used today, including:

This large set of accurate models makes it possible for EXata and QualNet users to achieve faster than real-time simulations for large networks with thousands of nodes, including multi-domain networks and those employing the latest technologies such as 5G.