NJFX, the first and only carrier-neutral Cable Landing Station Campus in the U.S to offer Tier 3, carrier-neutral data center capabilities, announces that the HAVFRUE transatlantic subsea cable system will land at its colocation campus, in Wall, New Jersey. The HAVFRUE subsea cable will be constructed between New Jersey and Denmark, with branch connection to Ireland and Norway, by a consortium that includes Aqua Comms, Bulk Infrastructure, Google and Facebook. The consortium members selected to land the HAVFRUE system in New Jersey at the NJFX Tier 3 by the Subsea Colocation campus.

“NJFX welcomes the HAVFRUE cable system to New Jersey as it represents one of the most significant cable systems to ever cross the Atlantic,” comments Gil Santaliz, CEO for NJFX. “We are proud to be a part of this new subsea cable system as it furthers our goal to make New Jersey a strategic landing point for the world’s subsea deployments and serve as a major interconnection for global communications.”

New Jersey is already rich with subsea capacity, and as the other transatlantic systems start reaching their 20-year life cycle, the HAVFRUE design will start to make the economics of the other cables unviable. In just two decades, advances in subsea cable construction have resulted in HAVFRUE’s ability to deliver superior speed and lower latency design. NJFX has also collaborated with carriers to install diverse fiber to its campus supporting carrier diversity across North America with carriers such as Altice, Crown Castle Fiber, Epsilon, Windstream, Zayo and Zenfi. 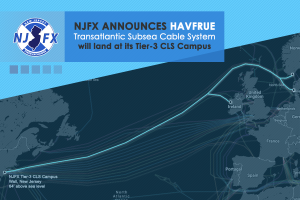 Along with a vibrant eco-system, NJFX has one major advantage: it sits at one of the highest natural points on coastal New Jersey. This location is superior in terms of disaster recovery. “As Hurricane Florence begins to wind down after hitting the southeast of the United States, it’s a reminder that networks who colocate at NJFX can feel reassured, knowing that our facility sits more than 60 feet above sea level. NJFX, with an onsite utility substation and a Tier 3 design, is  manned 24/7, 365 days a year,” adds Santaliz.

With the HAVFRUE system, NJFX now has four cable systems landing at its campus facility, including TGN1, TGN2, Seabras and the only subsea cable to directly connect New Jersey to New York, WALL-LI. The new HAVFRUE system joins other subsea cables on the NJFX campus that interconnect Brazil, the UK and Caribbean in a single building, making NJFX the only one of its kind in North America. The NJFX campus is dedicated for interconnections to global networks with actual physical subsea cables.