FirstLight Fiber has increased its footprint with a considerable acquisition. The leading fiber-optic bandwidth infrastructure services provider operating in New York and Northern New England, announced today that Oak Hill Capital Partners has completed its acquisition of Oxford Networks, and has combined the operations of Oxford with FirstLight.

This is quite significant, as FirstLight now operates 5,000 route miles of high-capacity, fiber optic network spanning five states with 4,400 locations in service and ten data centers, many of which are SOC 2-compliant and offer Cloud and Managed services.

“The acquisition of Oxford more than doubles the size of our business, dramatically increases our scale and network reach, and better positions FirstLight to continue meeting the growing bandwidth infrastructure needs of our customers,” commented Kurt Van Wagenen, President and CEO of FirstLight.

Scott Baker and Benjy Diesbach, Partners at Oak Hill and members of the FirstLight Board of Directors, added, “Closing the acquisition of Oxford is an important milestone for both FirstLight and Oak Hill.  This transaction represents an exciting next step in our plan to create the leading fiber provider in the Northeastern U.S.”

The combined company, along with the previously announced acquisition of Sovernet Communications, will form an entity that has an exceptional foundation to serve the needs of both regional enterprises and communications carriers.

The Sovernet transaction is expected to close early in 2017, following the satisfaction of customary regulatory approvals, and will further increase the size and geographic footprint of FirstLight.  Once complete, FirstLight will operate a network spanning 9,500 route miles in five states and Canada, more than 5,000 on-net locations, and 11 data centers with 128,000 square feet of space – not a bad way to kick off 2017! 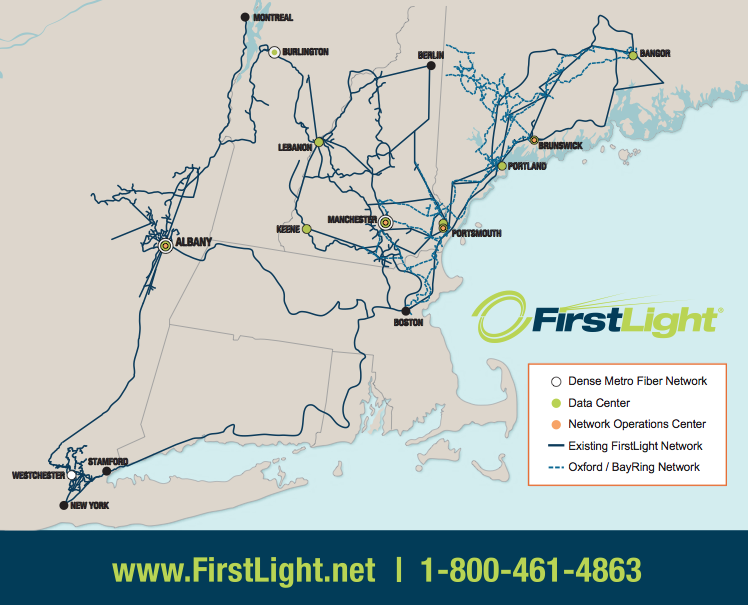