“It was incredibly gratifying to be able to stand with our industry partners, customers and long-time supporters last week as we commemorated the grand opening of our MTL-2 Data Center,” said Todd Coleman, Founder and CEO of eStruxture Data Centers.  “We celebrated the culmination of over 2 years of hard work and dedication with the team that made all of this possible.  The site is truly state of the art and is a great indicator of the future of eStruxture.  Completed with excellence, it has the best of what the Canadian market has to offer – the best people, the best environment, the best technology and the best partners.”

eStruxture’s MTL-2 data center is located within 10 kilometers of Montreal’s city center and includes more than 187,000 square feet of colocation space with a planned total capacity of 30MW.  The site was beautifully showcased at the grand opening as guests were invited to take a private tour of the recently completed facility, where they could see the best of the best in terms of data centre innovation and sustainable infrastructure.  Additionally, they were able to witness first-hand the integration of the eco-friendly power and cooling options that have made Montreal a leading location globally for new data center development. 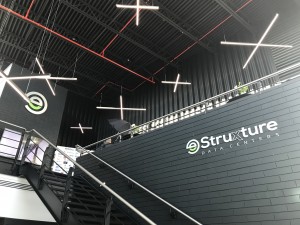 Jonathan Wener, Chairman of Canderel, eStruxture’s original investor and long-time supporter had this to say, “Since I first met Todd Coleman, I knew that he had the vision that would transform the data center landscape in Canada.  Todd has brought together an outstanding team, set to drive the company forward and bring our shared vision to life.” Wener went on to say, “In just over 2 years, Todd and the team have expanded in space, resource and capital, delivering way beyond any expectations I had entering this venture with him.  I am proud of the work that has been completed to date and I look forward to what the future holds.”

Clients and partners were also eager to share the experience that they have had working with eStruxture.  Companies such as Megaport, IX Reach, Beanfield, Createch, Raynault VFX, CBRE, and others were just some of the partners who expressed the honor that they have had to work with eStruxture and watch as the company has rightfully staked its claim as Canada’s leading cloud and carrier neutral data center provider.

“There are only a few data centers in the world that could build such a remarkably impressive facility like the one that eStruxture has built at MTL-2.  It really speaks to Todd Coleman’s leadership and the engineering partners that eStruxture works with,” expressed Dan Simmons, Director of Cloud Strategy for Beanfield Metroconnect. “eStruxture has done an outstanding job in attracting the customers that we have always desired to work with and the company focuses on innovation just like we do.  We are thrilled to be part of the eStruxture’s partner ecosystem and are excited to see what the future holds for the growth of both companies.”

In addition to the MTL-2 site, eStruxture has two other sites in Montreal, two in Vancouver and one in Calgary.

To learn more about MTL-2, visit eStruxture’s website at www.estruxture.com.