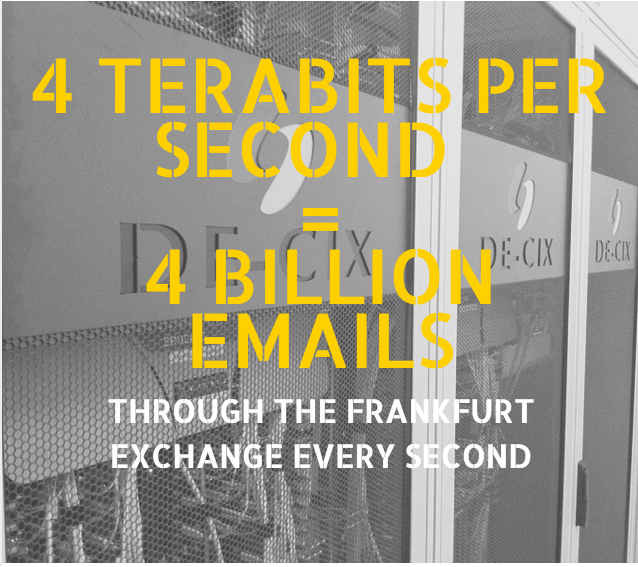 DE-CIX today announced that its flagship Frankfurt exchange has exceeded a new traffic milestone of 4 Terabit/s. The traffic peaks at the exchange steadily climbed throughout the week toward the 4 Terabit/s level and was officially reached as of the evening of Tuesday, April 28.

The number of Internet users worldwide continues to grow, which is forcing operators to cope with massive data quantities that are quickly becoming the new normal. To put 4 Terbit/s speed into perspective, it is the equivalent of sending four billion emails through the Frankfurt exchange every single second. DE-CIX has reported that many of its customers are upgrading their connections at its exchanges to 100 GE in order to effectively handle these large quantities of data that continue to grow.

“The development that the Internet has experienced over the last 20 years is truly unbelievable,” states Harald A. Summa, DE-CIX CEO. “When we started DE-CIX in 1995, we served three Internet Service Providers and offered a total capacity of 10 Megabits. In contrast, today we have a total capacity of 48 Terabits and hundreds of global 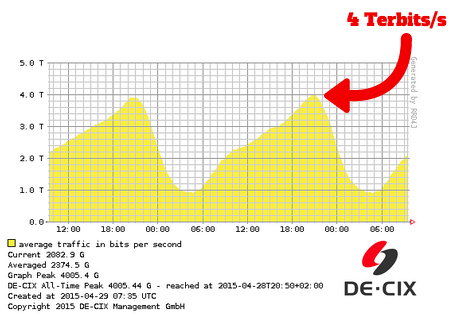 customers. In 2005, our peak speed reached 22 Gigabit/s, and now today we’re clicking along at rates above 4 Terabit/s. HD videos, the growing number of mobile end-user devices and Cloud Computing are driving Internet data growth rapidly along. The end is nowhere in sight.”