With an investment from Tiger Infrastructure Partners, a middle-market private equity firm, Crosslake Fibre bolsters its presence in the marketplace. Crosslake is constructing the first submarine cable from 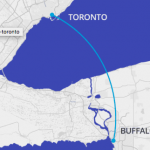 Toronto to Buffalo via Lake Ontario. The project stems from demand for high capacity, low latency bandwidth, as well as changes in the Canadian telecom industry, which previously limited foreign ownership of fiber by non-Canadian carriers. The targeted ready-for-service date for the cable system is September 2018. “Crosslake will enable the purchase of new, diverse dark fibre between Canada and the U.S., allowing carriers to displace leased fibre and add diversity,” said Michael Cunningham, CEO of Crosslake. “We are excited to partner with Tiger Infrastructure to grow the Crosslake platform.”