Cascadia FiberNet to Build New Fiber Network Between Vancouver, BC and Seattle, WA

Previous Next
Cascadia FiberNet to Build New Fiber Network Between Vancouver, BC and Seattle, WA

Cascadia Gateway and its affiliate Cascadia FiberNet Inc. are working on a series of collaborative projects spanning the Cascadia bio-region corridor between Vancouver, British Columbia and Seattle, Washington. The Initiative embraces the concepts put forth under the “Cascadia Innovation Corridor” project being undertaken by various public and private sector organizations, with its purpose being to develop regional business across the international border between the Province of British Columbia, the State of Washington and AsiaPac. 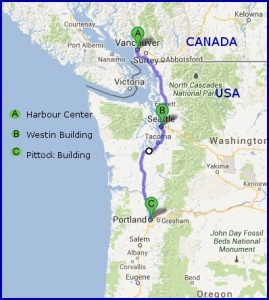 864-strand fiber, carrier-neutral network between the preeminent carrier hotels in Vancouver, BC, and Seattle, WA: Vancouver’s Harbour Centre and Seattle’s Westin Building Exchange, at the end of 1st quarter, 2019. The Ready-for-Service projected date is the end of the 1st quarter, 2020.  Once in place, it will be the largest fiber network ever established between the two cities.

“The Initiative being undertaken by Cascadia FiberNet is a critical next step forward in meeting the growing capacity demand north and south of the border,” states Michael Boyle, Strategic Planning Director, Westin Building Exchange. “Building an open cable allows for new entrants to thrive and new opportunities to come to fruition, whether it be through enhanced cloud services, support of the burgeoning BC media/ Visual Effects industry, or connecting Canada to the Asia Pacific capacity coming into North America through Seattle. The Initiative opens Canada up to extensive opportunities globally, and will greatly benefit the markets of Washington, BC, and AsiaPac.”

Joe Grech, President of AFL Network Services adds, “We’re proud to be the partner of choice to provide construction and engineering services, as well as AFL’s world-class fiber optic cable and accessories for the Cascadia FiberNet infrastructure project. As a company with offices in both Vancouver and Seattle, we know first-hand the value enhanced communications infrastructure will bring to the Pacific Northwest. We’re excited to be part of the partnership that will provide increased capacity across the border, benefit communities across the entire region, and create new jobs in the area.”

The new network will be the largest fiber optic network ever built between Vancouver and Seattle and is the first in a series of 8 major initiatives set out toimprove connectivity and capacity between BC and Washington and connect the Cascadia region on both sides of the international border with AsiaPac via a subsea fiber optic cable. In alignment with the rural broadband initiatives in both regions, the completion of the Cascadia network will benefit the citizens and businesses it connects by providing open access, competitive ultra-high-speed bandwidth to urban, suburban and more significantly rural communities alike between Vancouver and Seattle on both sides of the border.