After recently announcing an expansion to Asia, Anova Financial Networks, the Chicago-based international carrier and market data provider, just announced that its subsidiary FE Telecoms LLC has earned a Service Based Operation License in Singapore and a Notification License in Japan, allowing Anova to move forward with operations in those areas. 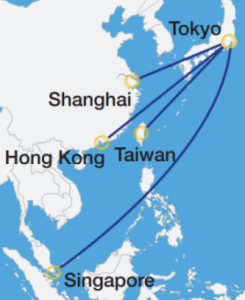 Singapore (SGX) to Tokyo (CC2), the first of a four-site network, is the first to go live, offering the best-known latency between key financial hubs. The Shanghai to Tokyo connection will be operational next, followed by Hong Kong to Tokyo and Taiwan to Tokyo. This new infrastructure taps into Anova’s global footprint, which extends to key financial markets across Asia, Europe and North America. Anova pairs exclusive wireless technologies and best-in-class fiber to deliver the preeminent intra-Asia connectivity solution.

“The approval to operate in Asia and the start of our Singapore to Tokyo pathway mark a historic moment for Anova – the official launch of our first greenfield network in the region,” said Michael Persico, CEO of Anova Financial Networks. “Now with full licensing to move forward with this major expansion, we’re thrilled to answer the resounding market demand for lower latency connectivity in Asia built for the financial community.”

To learn more about Anova Financial Networks, visit www.anovanetworks.com and follow the company on LinkedIn and Twitter.

About the Author: Katie Estep