All Aboard! Hibernia Express Cable-Laying Ships Take to the Atlantic

Previous Next
All Aboard! Hibernia Express Cable-Laying Ships Take to the Atlantic

Over 2,000km of Hibernia Networks’ Hibernia Express cable has been manufactured and loaded onto three cable-laying ships set to take to the Atlantic Ocean to lay the low latency, high capacity fiber cables. The deployment of the ships marks an exciting milestone for global communications as Hibernia Express will be the first modern fiber optic cable connecting North America to Europe in more than 12 years.

Hibernia Express will connect North America and the UK via the straightest possible route, which will provide the fastest route available and reduce transatlantic latency by at least five milliseconds. The submarine cable being used is a six-fiber-pair cable with a total cross-sectional design capacity of over 53 Tbps. Hibernia Express will launch with 100 Gbps tranmission capacity using TE SubCom’s C100 SLTE platform. Additionally, the submarine cable will have a portion of the fibers optimized for 100×100 Gbps design and a portion of the fibers optimized for lowest latency.

The route required TE SubCom to manufacture over 4,600km of submarine cable and over 60 amplifiers, which are being loaded and laid by the cable ships. The ships will take three separate routes over the course of the summer to complete the build of the shortest, pre-determined route connecting the two continents. The first cable ship will travel from Halifax, Nova Scotia to the south east of Newfoundland. This ship will then continue on over the Atlantic to connect the Irish branching unit to Cork, Ireland. The second cable ship begins in Brean, UK and travels to the west of the Porcupine Bank off the coast of Ireland. The third cable ship will start from the south east of Newfoundland and will connect to west of the Porcupine Bank and complete the final splice. 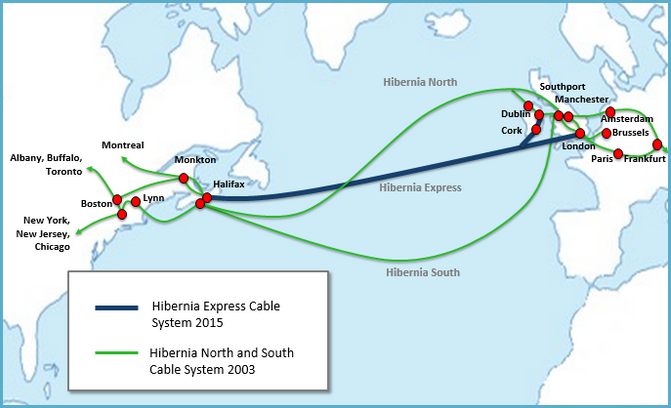 “Having the cable laying ships in the Atlantic is a huge milestone for Hibernia Express,” said Bjarni Thorvardarson, CEO of Hibernia Networks. “This historic cable build has been a long time coming, and included arduous planning, financing, land and sea surveying and cable manufacturing. The process has required the hard work and determination of our entire team here at Hibernia Networks, the support of our investors and customers, and our top partners like TE SubCom, to allow us to see this project through to fruition. In a few short months, Hibernia Express will be ready for service and collectively, we will make history for deploying the highest capacity, lowest-latency trans-Atlantic cable connecting North America and the UK. We are excited and proud, not just for Hibernia Networks, but for the much-needed, fast and high-performance capacity we can bring to communications networks around the world.”

Hibernia Express is on schedule for delivering service to high-bandwidth network operators, including carriers, global financial firms and technology companies, in September 2015.