Previous Next
5 Requirements Your Network Simulator Tool Must Satisfy

As communication networks become ubiquitous, there is continuous innovation both in the technologies they employ and the services they are expected to provide, creating new challenges for equipment manufacturers, service providers, network planners, and operators. Network simulation can assist in addressing many of these challenges, including:

In order for a network simulation tool to add value and provide a high return on investment for users – network operators, planners, designers, testers or analysts – it must satisfy the following requirements:

Network simulations must be able to accurately reproduce the behavior of the corresponding network as it operates in the field. To achieve this, the simulator must model the network devices, end-to-end protocols, traffic, and the operational environment, accurately and at the appropriate fidelity. Simulators that use abstractions to reduce model execution time (e.g., by ignoring terrain effects or buffer size or bursty traffic patterns) will fail to capture the network dynamics which significantly affect network performance and lead to potential issues like congestion, voice quality degradations, or failures. 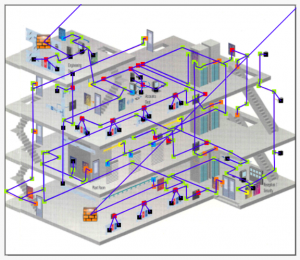 and meaningful results; thus fast execution speed, without sacrificing accuracy, is essential. As network size increases, the simulation time often increases non-linearly with size and traffic volume. As network dynamics of large networks are very different from smaller networks, extrapolation of results obtained by simulating small networks to larger networks is difficult.  Therefore, for the simulation tool to be useful, it must be able to run ‘at-scale’ models faster than real-time without sacrificing accuracy.

The results from a network simulation are used for network analysis and to provide insight into network operations. To facilitate this, the simulation tool should have the following features:

Ability to Interface with Live Applications

The network simulation must be able to interface with live network components and real applications. This in turn requires that the simulation run in hard real-time.  In other words, the application will interact with the simulated network exactly as it interacts with the corresponding live network.  This enables an analyst to directly assess the application’s performance under different operating conditions, such as different terrains or mobility paths, simply by modifying appropriate parameters of the network model. Similarly, such simulations can be used to investigate potential interference among applications under different operating conditions like varying levels of traffic intensity. This provides a low-cost and high return on investment alternative to performing such assessments using physical testbeds.

SCALABLE’s network simulators, QualNet and EXata, can run accurate, at-scale network simulations faster than real-time, support an extensive library of network models, and provide a suite of tools for scenario creation and network visualization and analysis.